The item detail page provides a faster workflow for reviewing item details before purchase. It uses much less bandwidth and typically loads faster than the eBay item listing page.

This option can be disabled in Settings.

If you have issues with the site appearance, please clear your cache and reload the page.

BINSniper Sidebar Browser Extension (webextension add-on) has been uploaded to Mozilla Add-ons and is now available.    This new edition is a streamlined version of prior releases designed to work well with the new requirements of Firefox and back to BINSniper’s roots. 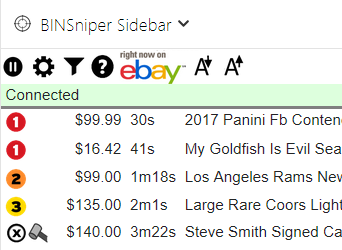 You can also install approved versions thru the Firefox menu: Tools->Addons and then search for BINSniper.

Thank you for your patience.

And more apps are coming…

The supported prior legacy add-on releases will continue to work under older Firefox releases until our migration to these new apps are completed.  Uptime is our number one priority.

An update to VieBuy.com has been released on the site.  This corrects an issue with the file export feature.  Recent browser releases are blocking the mechanism used in prior releases for security reasons.

The export feature has changed so that instead of a popup appearing, you will be prompted to save a file.

The exported files can be imported using the settings option.  You can use this feature to backup your filters, or to copy your filters from one browser to another on the same computer or different computers.

This post is being updated regularly with current status, please check back.

Thanks again for your patience.

Poll results:  incognito/privacy mod is nice to have, but not critical.   As it turns out, Firefox does not yet implement what we need to be compatible with incognito mode, so this is a future wishlist item.

Documentation of the new feature is complete and available at:  BINSniper Sidebar Firefox Add-on for eBay    There may be some minor doc updates yet.  These docs were adapted from prior releases and there may be some changes needed to make sure they are current all the way thru.  This will be done on an on-going basis and does not impact the release.

Aside from scheduling and other time demands, the majority of issues delaying this were related to the WebExtension migration, which was more trouble than expected and required some workarounds.

Thank you for your patience.

The new edition is a streamlined version of prior releases designed to work well with the new requirements of Firefox and back to BINSniper’s roots.

And more apps are coming…

The supported prior releases will continue to work under older Firefox releases until our migration to these new apps are completed.  Uptime is our number one priority.

Versions 3.0.x – 3.2.x have been removed from Firefox Add-ons site and will be blocked completely on the servers on May 5.

Due to abuse, version 2.8.x has been removed from Firefox Add-ons site and will be throttled beginning Apr 30.

All users should migrate to version 3.4.x

Please respond to this post if you have any issues with version 3.4 that you’d like addressed in the new release.  We can’t guarantee that requests will be implemented in the next release, or in future releases, but all requests are considered carefully and weighed against the need of all users of the products.

As you may be aware, the Mozilla teams have decided to yet again re-engineer the Firefox add-on system.  The change was scheduled to occur in version 57 of Firefox released today.  You may see an update pending release.

Many users will not be moving to Firefox 57 due to the incompatibility with many popular add-ons. Many of the new WebExtensions can run under Firefox 56, so Mozilla’s rush to ban legacy add-ons was not really necessary. But they have other reasons.

You may also consider installing two versions of Firefox. You may also disable automatic updates.

This change to the WebExtensions system will cause a great many add-ons to stop working with no path forward for compatibility.  Some developers have even chosen to drop Firefox add-on development entirely as a result of the constant design direction changes for extensions at Firefox (the fourth in as many years).

The current 3.x versions of BINSniper will not be compatible with the new releases of Firefox due to the significant changes in the way Firefox handles add-ons and features that they chose not to support in WebExtensions.

Current versions of BINSniper will continue to work with older versions of Firefox from v39 – v56.

A new release, the BINSniper Sidebar add-on, is under final testing now.  The new version will be similar in features to previous versions.  The sidebar option is expected to be the same, but the streamer bottom bar option will no longer be available.

We are also in the process of developing a browser-agnostic web-based version of BINSniper that should work with most modern browsers and not require you to go thru the extension process. This version will support several modes, including a streamer mode (bottom panel) and a full page mode.

Viebuy.com is not affected by the Firefox changes, works with other major browsers, and provides similar features.

Watch this site for more information on the new releases.